Tens of thousands of people flocked to Sanam Luang Thursday to bid their final farewells to the late King Bhumibol Adulyadej whose body has been kept behind the golden urn at the Grand Palace.

Many came early in the morning and some had been there since Wednesday night. At 10am, the queue of mourners dressed in black stretched from Sanam Luang to the Democracy Monument on Ratchadamnoen Road.

People used paper fans to stave off the sweltering heat. Children patiently stood with their parents. Despite the long hours of waiting, their faces appeared full of solemn determination to pay their respects, to bid a final farewell to their beloved late King before officials closed the palace gates for the final time.

At the City Pillar Shrine, people were asked to turn right to approach the Wiset Chaisri Gate of the Grand Palace. After passing through the gate, people grew quiet and more solemn. They slowly walked to the Dusit Maha Prasat Throne Hall where the body of the late monarch has been kept since Oct 14 last year.

After long hours of waiting – varying from three to eight or even 12 hours in some cases – the final farewell was brief, less than a minute. People were told by officials to krab or prostrate to pay respect to the late King and move on so the next group could enter. On the exit through Phiman Deves Gate, officials handed out photos of the late King as a memorial keepsake.

Many mourners interviewed by the Bangkok Post said the long wait was worth it.

The fact that Thursday was the final day in which the public could pay respect made the event historic and truly memorable. 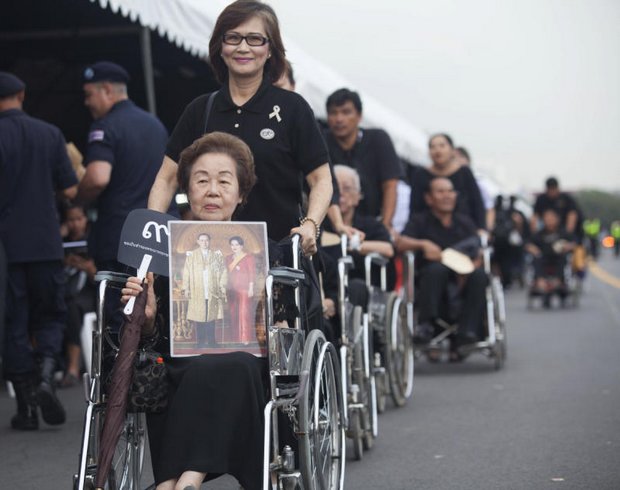 Elderly people in wheelchairs were assisted by family members as they awaited their turn in the lines.

Pradit Pumsan, who drove from Yasothon province to Bangkok to make his farewell, said: “Our family agreed a long time ago that we would come to Bangkok to pay respect on the last day. We are prepared to wait until midnight if necessary. We want to show the world how much we love the late King Bhumibol and wish to be his servant forever.

“After all, this is the last thing that our family can do for him.”

Accompanying him was his wife and two sons. They arrived on Wednesday night and stayed in a hotel. The family set off for Sanam Luang at 7.30am and completed their mission at 2.30pm.

His son, Wutthipat, 14, said the late King has been his role model for practicing kindness and patience. “It is very special day to spend this historic moment with your family in paying respect to the late King,” he said.

The Pumsan family thanked the Bureau of the Royal Household for extending the period of respect to King Rama IX’s body from Sept 30 to midnight on Thursday, Oct 5.

Patrapol Nukhao, a 54 year-old Bangkok resident, had come to pay respect 138 times. Yet he promised himself he would come for one more day – the 139th. Nine, he said, is his lucky and auspicious number.

“People coming today are tired from the hot weather, but that means nothing when compared with King Bhumibol’s sacrifice, as he did great things for Thais,” he said.

While people were waiting, many volunteers made sure people were as comfortable as possible. They served water, food, snacks and supplied medicine and collected garbage to make the area look clean and orderly. They helped arrange the queue, giving out information to make sure the event ran smoothly and orderly.

Pairuch Kansai, a member of “Volunteer Radio for Dad”, said his team has been at Sanam Luang for more than 300 days. For him and his group, it had been a great honour to take care of “the King’s guests”. 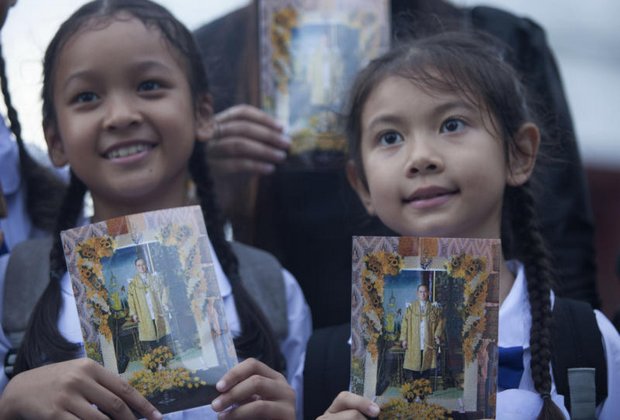 Children stood as patiently as their parents in the solemn lines waiting to enter the Dusit Throne Hall.

Michael Geraghty, from New Zealand, attended “the historic event” with his Thai wife. He said he was “amazed” by the volunteers who worked with big smiles and patience even though they had done for many days.

“I feel very lucky to be part of this country’s historic day. Thais have already made a statement telling the world how much they love their Great King.”

International Screen – THE HAPPIEST DAY IN THE LIFE OF OLLI MÄKI