Uber Technologies Inc. launched its motorbike-hailing service in the southern Indian city of Bangalore Thursday, a week after the San Francisco-based company first made the offering in Bangkok.

The service, called uberMOTO, allows users to hail a motorbike in select parts of the city using Uber’s app on their smartphones to ferry them to their destinations for fares beginning at 3 rupees a kilometer ($0.04 per 0.62 miles). Riders can pay by cash or credit cards for the service currently available for 14 hours a day starting at 7 a.m.

“We will continue to extend uberMOTO’s coverage over time,” the company said in a statement Thursday. 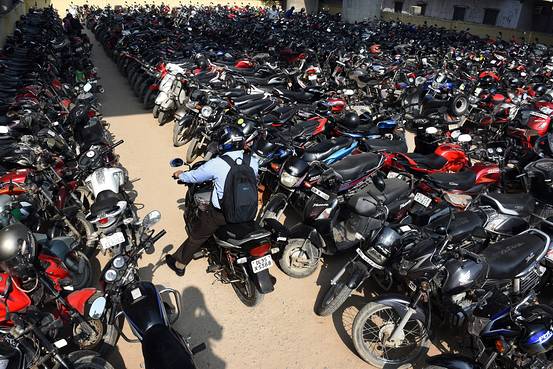 uberMOTO is aimed at cutting crippling congestion in the city, dubbed India’s Silicon Valley, where authorities say close to four million two-wheelers make for more than 70% of the vehicular population. The city is infamous for its traffic gridlocks and has some of the longest traffic delays in the world.

In December, Uber launched its carpooling service in Delhi, allowing users to hail a ride through its budget option uberGO and share the car with another passenger after the government in the national capital implemented a rule, dubbed “odd even,” allowing cars on roads on alternate days depending on their license plate numbers.

The move, aimed to curb alarming levels of air pollution in the capital, helped thin out traffic volumes.

Uber didn’t disclose the number of motorbike riders on its platform in India. The company said it had incorporated safety features available on its other services, like GPS tracking and the ability to share trip details with friends and family in the service, into uberMOTO as well.

On-demand two wheeler apps are few in India although many countries in Southeast Asia where traffic-clogged streets are also a common phenomenon have seen a flurry of them in the last few years.

Last year, Uber stopped a service that allowed its users to book three-wheeled auto rickshaws in Delhi less than a year after its launch. It said in a statement at the time that it was working to scale the service.